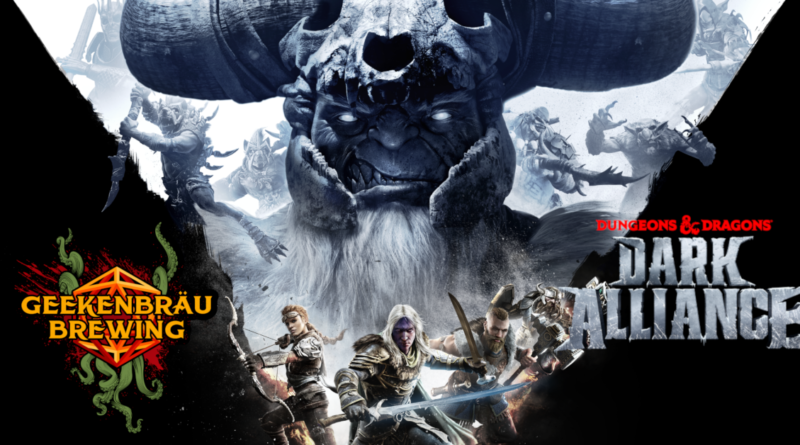 I have been waiting patiently for Dark Alliance to drop, much like any D&D fan. I didn’t come in expecting to build a character,  nor did I think it was going to be an adaptation of the tabletop game.I expected an action game with light RPG elements and that’s pretty much what I have been given, so when I say this,  it’s from a place of what I would say is realistic expectations.
Dungeons And Dragons: Dark Alliance is a disappointment.

I’ll break it down into a few thoughts. How the game feels. How it plays. And what is

So how does it feel? We start off with a camp, using a map to travel to missions, this kinda feels like you’re in a post game area, going back to what you’ve done already. Missions can be tackled over and over,  with ever increasing difficulty as you compare your character’s overall strength score against the difficulty level,  which would be fine, but it feels to me as if the game hasn’t been polished, that the focus was on trying to make a New Game+ instead of focusing on giving a solid game itself. Combat feels clunky, in a world where we’ve got a full range of Arkham games with Batman leaping between enemies, moving to a game where you need to target enemies individually,  if they aren’t in front of you then you’re not going to target them,  the combat just feels like a step back.

Enemy animations are far from perfect,  often leaping from a prone position to on their feet without any in-between.

Then there’s the looting,  rife with RNG, you could theoretically run through a map and not receive strong enough equipment to challenge the next level forcing you to upgrade items using in game crystals.On top of which,  having pre-ordered the game, I was expecting access to new weapon/armour sets, however they are merely weapon/armour skins and do not apply to all weapon/armour, making it feel as if my preorder bonus has been withheld from me.

Then we’ve got the crystals, I get that Crystal Shards are a big thing in Icewind Dale and the Drizzt novels, but there’s no upgrade mechanic in D&D for any of it established and it truly feels like they’re trying to shoe-horn in tiered currencies, which wouldn’t surprise me if they included micro-transactions later, I have seen it done before, and the fact crystals are awarded randomly and you can level them up, adding levels of complexity that just aren’t needed.

Buttons seem to be unresponsive.
I’m not talking about the combat, but picking things up and opening the menus just seems to take an awkwardly long time and I cannot work out why.

I touched on NG+, so let me go into that in a little more depth.
Now, in Dark Alliance your characters are defined by a strength score that starts (or did for me) at 1000, with each level given a recommended score and I assume, increased loot per level.
So it appears the developers made the game with the same kind of mentality you get in end-game MMO’s, where you grind for ever increasingly stronger loot, to increase your item level, so you can do the same dungeon at incrementally higher levels.
Really, I am not going to begrudge the game having different difficulties, but it just feels like they took that MMO mentality and built the game around it.

And really, that’s how it feels all in all.
Like I am in post-game content, from the lacklustre base in Kelvin’s Cairn, to the item level like rating system.
I feel like I missed out on the game itself, and I just don’t feel gripped by it.

That isn’t to say there is no fun in the game, I like being able to run around the frozen North, seeing Goblins yell as I attack them, and the cinematics are great.
But getting into the game is just disappointing to me, I can understand others might find fun in it, but it just misses the mark
I am however, hoping that the Devs will improve it because I do think it has potential, but it just isn’t there yet.

Addendum:
So having read a few other reviews, I have seen that they tend to agree with me, with the caveat that after a couple of hours the game gets better, or gets better with co-op play.
To this I say fuck off.

I shouldn’t have to invest multiple hours to get into a game.
Similarly, a game where you can play solo, should have scaling to make it suitable for solo play.

Lets look at two modern gaming successes, Batman’s Arkham series, and Spider-Man.
In all games, you are swarmed by enemies who can interrupt your attack, but Arkham and Spider-Man allow you see when someone is about to attack you, and gives you the opportunity to perform a move fluidly that gets you out of the situation.
In Dark Alliance, especially in solo play, you are locked into a combat move and if someone interrupts you then you are going to have a bad time.

In both Arkham and Spider-Man, your character will leap from enemy to enemy allowing for fluid combat that feels strong.
In Dark Alliance you have to target, lock on, swing your camera around, and if they’re too far away you’re just hitting air.

When I say Dark Alliance feels like an old game, I don’t say it to put it down, I truly want it to be good, but modern design mentality doesn’t align with what we have here.
I will eventually play Dark Alliance with friends, but I cannot currently suggest to any of them that they buy it.