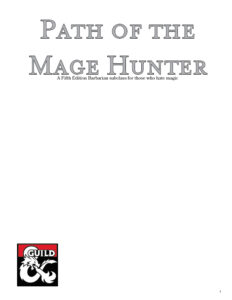 Once again, I am bringing a concept for a subclass that I have had before, though I am going to simplify it compared to the previous idea.
Originally, the idea for this Barbarian carried two choices per level, you could either go Hunting, or Tracking, but I think for this we’ll take the best of both world.
Now, once again we are leaning into the Barbarian trope of being anti-magic, which can create some interesting party dynamics.

Maybe you swore revenge against a magic user for some indiscretion, or perhaps you come from a nomadic tribe who view magic as unnatural, or it could even be as simple as an allergy to magic, all you know is that you can’t trust magic.
Were you raised in a Magic hating cult of luddites, or do you break out in a rash every time the party cleric tries to kill you?

We’ll start off with something thematic, we’re going to give our Mage Hunter the power to make caster’s life just a little more difficult.

Aura of Aversion
At 3rd level, when you are raging you exude an aura that disrupts the weave around you, making magic just that little bit harder to use.
Any creature within 5 feet of you suffer disadvantage on any concentration checks, and on any spell attacks made.

Next we’ve got to consider what a Mage Hunter would find useful, the power to sense magic.

Mage Tracker
Starting at 6th level, you gain the ability to sniff out the use of magic, once per long rest you can cast Detect Magic as an innate ability, that does not require any spell slot or component.

As we’ve seen so far, our Mage Hunter is being designed to make life difficult for magic users, so the next step? We’ll add something protective for our friends.

Weakened Magic
From 10th level, you gain the ability to disrupt the flow of magic further around you.
If you are raging and a creature you can see within 30 feet of you takes damage from magic, you can use your reaction to reduce that damage by 2d6.
This increases to 4d6 at level 14.

Lastly, we’ve got to add something a little thematic, a big bang if you will, we’re going to make it an offensive ability.

Unstable Weave
When you reach 14th level, when you are raging and you are hit by a spell you can disrupt the weave around you. As a reaction, you can create a burst of magic around you.
Roll a d4 to determine the damage type.
A magical explosion centered on you spreads out in a sphere hitting anything unless blocked by full cover, all creatures caught in the blast must make a dexterity saving throw (DC is 8 + STR modifier + proficiency bonus), taking 8d6 damage or half as much on a successful save.
1 – Fire
2 – Lightning
3 – Cold
4 – Psychic

So there we go, a Barbarian who can give your party a bit of a boost when fighting magic based opponents, but doesn’t make it a cake walk.
In fact, any Path of the Mage Hunter is going to be just as much a liability to their own team, as they are to the enemies.
Both our level 3, and level 14 abilities are not targetted, so they can affect party members as well as the enemy, forcing the Mage Hunter to hug the enemy caster, whilst avoiding the party casters like the plague.