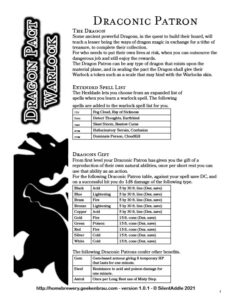 Right, before we delve into this, I have a small update.
I have a new job, and right now I am working this and my old job so my time is a lot busier right now, so rather than try and push for Friday updates, I will do Sunday starting this week.
This new job is why I have yet to polish and release the Necropolis, but that’s still in the works.

Now on to the post of the day, we’re going to build a Warlock subclass.
We’re going to do this using the Create-A-Patron: A Warlock Patron Creation Guide by Matthew Gravelyn, this is not a sponsored link, just giving you what I am using, and the reason why I’m doing this? The inspiration if you will, is this comment on Reddit, where a thread details that since Draconic Sorcerers ancestors may have made a deal with a Dragon, it would make sense for a Warlock to make their pact with a Dragon.

So lets build a Draconic Patron Warlock.
So we need to start with a name, and description of our patron

The Dragon:-
Some ancient powerful Dragons, in the quest to build their hoard, will teach a lesser being the ways of dragon magic in exchange for a tithe of treasure, to complete their collection.
For who needs to put their own lives at risk, when you can outsource the dangerous job and still enjoy the rewards.
The Dragon Patron can be any type of dragon that exists upon the material plane, and in sealing the pact the Dragon shall give their Warlock a token such as a scale that may bind with the Warlocks skin, or dragons eyes, or maybe they even have dragon blood running through their veins.

Next we need to select spells to give to the Warlock, as we do we should consider what we want our Dragon Warlock theme to be.
So to start, for each level we’re going to think about adding something that helps the Warlock, in this instance help means giving them something that could theoretically represent a lair action, the second thing we’re going to do is add spells that benefit the Warlock in carrying some manner of “frightful presence” over a creature.

Next we need to add a Level One feature and of course we want this to be themed based on the Dragon type you choose, so this will get formatted into a table at some point but for now.

You can speak, read, and write Draconic. Additionally, whenever you make a Charisma check when interacting with dragons, your proficiency bonus is doubled if it applies to the check.

Now a Level Six feature, primarily healing or supportive, I don’t think healing fits with the theme so we’ll go with something on the support end.

Imposing Presence:-
Starting at 6th level, when you make a Charisma (Intimidation) check, you are considered proficient in this skill check and add double your proficiency bonus to the check, instead of your normal proficiency bonus. If you successfully intimidate a target who means to harm you, you can choose to impose disadvantage on the next attack they make against you.

Next we get to level 10 which I feel is going to potentially be very powerful, but I feel like it is thematically appropriate, when we consider that their patron gets a Legendary Resistance.

Mortal Resistance:-
At level 10 as a reaction you can spend a Hit Dice per long rest, to either gain resistance to any one magical attack reducing the damage taken by half, or add 1d8 to a saving throw (This can be used after you roll the saving throw, but must be used before you know whether you succeeded or not).

And with that we have one more level left, at level 14 Warlock’s get their last Patron gift, so lets do something reasonably big with it.

Draconic Visage:-
When you reach Level 14, you can change what a creature can see when they look at you, replacing your image with that of your Patron.
As an action, choose a creature that you can see within 60 feet of you. It must make a Wisdom saving throw against your warlock spell save DC. On a failed save for one minute or until your concentration is broken (as if you are concentrating on a spell) they see you as a dragon of your Patron’s type, this effect ends early if the creature takes any damage.
When you next attack that creature, they take 10d10 damage of the type aligned with your Patron (for Gem, Steel and Astral (or other) Dragon types, the target takes Psychic damage).
You must finish a long rest before you use this feature again.

So there we have a Warlock Draconic Patron, but is that enough?
Warlocks also get Pacts and Invocations, though I don’t think we can delve into Invocations just yet, we can certainly flesh our Draconic Patron out with a pact.

Pact of the Scale
Requirement: Draconic Patron
As an action you can manifest Draconic wings for one minute.
Though you cannot fly, when you take at least a full dash immediately before you can use your wings to glide across short distances.
Your glide speed is equal to your movement, and for every 6 seconds you glide forward, you drop by 5 feet in height.
Additionally, if you fall from enough distance to take fall damage, you can spread your wings to reduce your fall damage by half

Invocation
(It should be noted, I wasn’t inspired to make any specific Invocations, but this one was suggested by Will Knight on twitter, who regularly posts awesome D&D ideas)

Draconic Study – Breath Weapon
Requirement: Draconic Patron
When you use your Dragons Gift breath weapon feature, the damage dice increases to 2d8 at level 6 and 3d8 at level 11.

Time for an update, not big enough for a post all its own, one thing I have considered is that if anything happens to Geekenbrau, all the content I have would vanish and if it is something you want to keep track of? Well, that’s trash tier.
So, I will be going back and adding everything over time, to DMsGuild as a “pay what you want” download, if you want to throw a little money at me? I want to give you the chance, but I want anything I publish on this blog to be freely available
This way if I vanish as a person, you can always have access to the things I have made.

I have redirected the initial download link for this post already, and if you enjoy that? More is coming.

One thought on “Build a Warlock Draconic Patron”