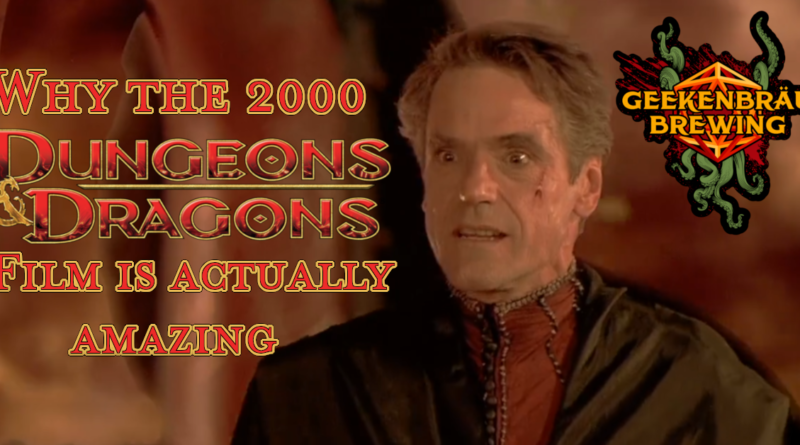 Right, so this is a discussion based upon a tweet thread I wrote on twitter whilst ill.
If you would rather go and read that original thread, do it.

So, I heard there’s talk of some fellow named Chris and a D&D film.
I hadn’t planned to do this as tweets, but I’m going to tell you why nothing can beat the 2000 Dungeons and Dragons film, starring Justin Whalin, Marlon Wayans and Jeremy Irons.
A thread.https://t.co/wE2DW1vh0y

Okay, so lets begin, I am going to put forward an argument that the Dungeons and Dragons film from the year 2000 (rated 3.6 on IMDB) is the greatest D&D film you could imagine, and if you think I raise some good points I would love to hear this in the comments below, I need validation. (Or conversely if you think I am talking shit, let me know why).

Lets start with a discussion of the quest.. I meant to type plot but I am not going to change this, and to kick us off lets do copy+paste of the plot off IMDB and then I’ll give a bit more detail on it (if you want to avoid spoilers, avoid my version)

The Empire of Izmer has long been a divided land. The Mages – an elite group of magic-users – rule whilst the lowly commoners are powerless. Izmer’s young Empress, Savina, wants equality and prosperity for all, but the evil Mage Profion is plotting to depose her and establish his own rule. The Empress possesses a scepter which controls Izmer’s Golden Dragons. To challenge her rule, Profion must have the scepter, and tricks the Council of Mages into believing Savina is unfit to hold it. Knowing that Profion will bring death and destruction to Izmer, Savina must find the legendary Rod of Savrille, a mythical rod that has the power to control Red Dragons, a species even mightier than the Gold. Enter two thieves, Ridley and Snails, who unwittingly become instrumental in Savina’s search for the Rod. Joined by a feisty Dwarf named Elwood, and helped by the Empress’s expert tracker, the Elf Norda, the young heroes go in search of the Rod of Savrille. From the deadly maze of the Thieves Guild…

Here’s actually a screengrab of the castlist from IMDB so you can see who is who (note: I had to edit it just a little to show all the important people, as apparently the principle cast rank lower than “Unnamed Mage”) 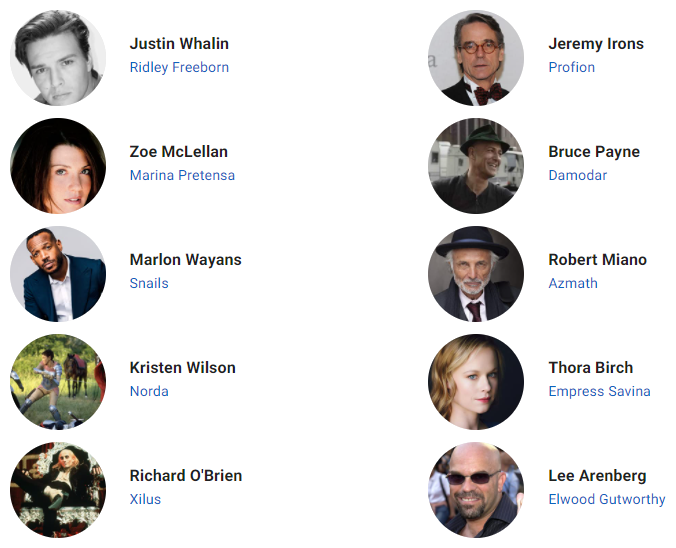 Now my explanation is gonna be slightly longer, and hidden behind a spoiler thing so only roll over it if you want to read details on a 20 year old film.

Right, so where do we begin? The 2000 film Dungeons and Dragons is a terrible fantasy film, the 3.6 score (at time of writing) accurately reflects this, but it isn’t a fantasy film.
It’s a film that is no less than a D&D game, and I will now show my workings on this.

Firstly, lets look at the bad guys plot.
It’s convoluted as fuck, does he want to rule the world? Does he just want a pet dragon? Is he envious of the Empress? No one knows, but we do know that Jeremy Irons plays the perfect drama queen in every damn scene, and boy does Profion like to talk.
I mean, we’ve got Profion trying to make a wand to control dragons, finds out there are actually TWO wands that have been created that do this, and drops all plans to make one? Heck nah brah, when it is confirmed they can be created, you go and try to steal the notes, find out how they were made so you can make a dozen, but we all know the point of a bad guy in your adventure is not to do the smart thing, but to give you a foil to defeat, making the smart choices make it harder for the good guy to win.
Profion is completely over the top, and his plan really unfeasible.
Though I know some people are of the opinion that Profion was losing the final fight against the Empress, and were they the only combatants that might matter, but instead they forget the political machinations of the film, the existence of the final fight itself has proven the Empress lost as the ruling Wizards take arms against her.
Were Ridley and the party unable to get the wand of Red Dragon control, Profion would eventually lose to the Empress but to the Wizards and the world, the Empress would look like the aggressor and the balance of power would change, in fact it is only through possession of the Red Dragon wand that Profion’s evil comes to light.
All good games need a macguffin.

Next, lets look at the party compostion.
We start off with 2 thieves (though I might argue Ridley is a fighter with a thief based background), a wizard, barbarian and ranger, the most unorganised party composition possible.
What is the importance of the party? In any good story, we need a balance of power, we need a tank to take the blows, a healer to keep the tank up and a damage dealer, but how many of your tables have actually had that?
For my own as a player I sat at one table that went to Barovia without a dedicated healer (though we did have a Paladin, minimal healing more tank-y).
And my second game? Two paladins, and two players multi-classed into cleric.
When we play a game, we think about what is fun and not necessarily what is best, who hasn’t wanted to play a game where you and your best friend get to be thieves robbing from the rich to right socio-economic inequality (for you are the poor, after all).
We can only walk away from this thinking that the players in this game also decided to enjoy themselves over what might be best.

Then we’ve got a few things that are too convenient.
Firstly, the wizards have a magical map that is so old they don’t know how to use it, but it is amazingly the exact same enchantment that a lowly commoner uses? I mean, that to me just screams out “I wrote this in the backstory and the DM ran with it as a puzzle”
Next, we’ve got Damodar turning up everywhere, as I noted previously, we have seen that magic and familiars can be used to track people, but we never see a logical reason for why Damodar and the guards are always a step behind the party.
Coincidences happen of course, but it exists purely to get the plot going along.
Third, there’s no real obstacle to getting the item, in fact it seems like not only is Ridley the right guy to get the wand of Red Dragon control but there is some manner of destiny, he alone knows how to read the map, he alone (after others tried and failed) get the Dragon’s Eye, he alone can go into the chamber to get the wand, there’s nothing exceptional about him, in fact he’d probably be level 1 all in all, and he doesn’t progress beyond it, he’s just the right guy at the right time in the right way.

Though I will probably come along and add more to this list when points hit me, the one I will end up on is the constant bad decisions.
Ridley and Snails? Decide to steal from the Wizards.
The Empress? Decides to pursue the wand of Red Dragon control.
Snails? Decides to flirt with a random Elf in a bar.
Damodar? Decides to work for Profion.
Profion? Decides to pursue the Red wand when he really didn’t need to.
Ridley keeps deciding to help out Marina, not because he’s a hero but because pretty face?
Snails decides to lightly toss the map back to Ridley.
Elwood decides to go with the party on the promise that someone will pay him.
Xilus decides to not be in the film enough, which is the biggest sin, I think we can all agree.

All of these decisions do not make for a good film, but we should all see something in there that reminds us of our own tables, because a fun game isn’t built on the optimal party, the optimal plot or the optimal choice, it’s built on choosing what is right for us there and then, a good game is based on feeling heroic even when anyone could have walked in to the room and taken the macguffin, it’s about having a bad guy who chews the scenery so badly that you can identify him without ever meeting him, and it’s about letting the DM forget about the curse on the item you just took because if he’s not reading his notes then.. you win.

Incidentally, two small changes I’d make, so the film makes more sense over all, 1) Make Profion create his green wand, so it becomes more pressing that the Empress get a second, also reveals his evil to the Wizards as even at the end of the film it’s never truly revealed.
2) Make the curse on the Red Wand Profion’s undoing, telegraph it in early so we as an audience pick up on it, but make Profion ignore it and it is his own hubris that causes him to fall.

I will never tell you that Dungeons and Dragons is a good film, it’s a guilty pleasure at best, but it is a D&D game that any of us should be used to playing, because it is silly, it is fun, it is built on coincidences and making the wrong choices.
I honestly feel if you go in to the film from the viewpoint that it’s just the character-view of some folks around a table, you will have a much more enjoyable time.
And if that appeals to you, oh have I got a future blog post for you..