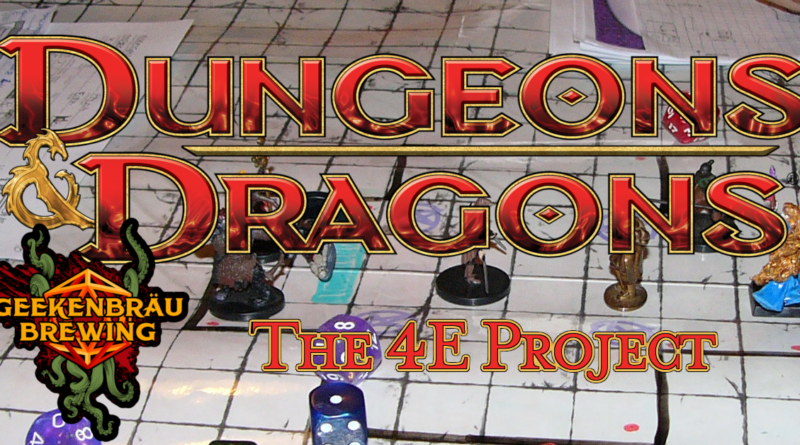 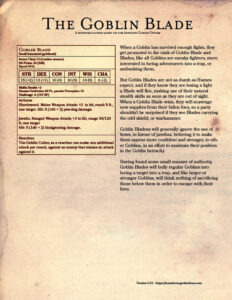 Welcome to the first post in the 4E project.
For those unaware, I am trying to update some of the 4th Edition monsters to 5E, with a hope to bring some of their more tactical sides along for the ride though I shall rename them just because I don’t want WotC to take issue, I will be 100% honest about the inspiration.

So today we start with the first of the Goblins (anyone who saw the original announcement knows the initial focus is on Goblins.
Based upon 4E’s Goblin Cutter, The Blade is a slightly upgraded Goblin, essentially what you get after a Goblin party manages to defend their caves or camp against a low level adventuring party, or they raid enough trade caravans.

In combat, a Goblin Blade should always be accompanied by at least a regular Goblin, if not leading a group.

Now, you might be asking yourself “Silent, why bother with all this Goblin-y goodness?” and it’s simple.
What WotC did in 5E is simple and boring, we have 2 Goblins (not including larger Goblinoids) so they quite often get used for the first level or two of an adventure and then ignored after that.
I don’t think Goblins need a full Tier 1 to Tier 3 adventure, but they should be more than just an inconvenience in your first session.

You don’t have to like complicating your game with multiple Goblins, however nothing stops you from running them RAW and changing their weapons and descriptions to suit your narrative.
Once I have a few Goblin posts under the 4E Project, I will see if I can write a small adventure to utilise them.

One thought on “The Goblin Blade”