This Sunday posting is inspired by this reddit post.
The question was put forward “How do you visualise extremes in a stat” and honestly, I don’t get on with the current answers so I’ll quote the current second-top answer here and then make my case.
(The top response just jumps straight to 0 for stats, so I’m comfortable skipping it as it’s a terminal extreme)

Comment from discussion How do you visualize extremes in a stat?. 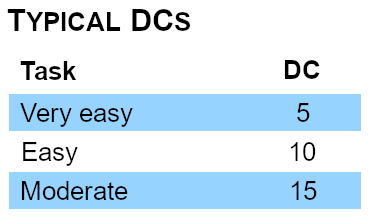 So where is my disagreement?
Lets look at the stat system for D&D 5E, having a score of 1 gives you a modifier of -5, which is of course common knowledge, but a -5 mod in Strength, does that make you feeble to the point you can’t lift a weapon? Does a -5 in Dexterity mean you can’t get out of bed?
Heck no! In fact, if we look at the DC chart over on the right.

If you have a -5 to a stat, you are on average going to be capable of “very easy” tasks, that’s to say anything you don’t have to really put any thought into is considered in 5E an automatic pass for a normal person, so walking without bumping into a chair? That’s very easy, heck depending on the DM that might be “So easy you don’t have a DC for it”, and with a -5 Dexterity mod that’s right where you are, you’re not unable to walk but you have trouble sticking to a straight line, but when you need to? You can leap over some patron in a bar fight, or bounce between walls to climb up and out of sight in an alleyway when being chased.

Same for Charisma, the comments I see around (second, older reddit post discussing the topic) consider a -5 in Charisma to be no personality, or virtually comatose.
It astounds me that people think that being unable to convince someone of your position means you either have no personality, or can barely function.
The stat details how easy it is for you to convince people of your position, or how likeable they see you, I’d say at a -5 you’d probably need to convince people of your intentions on occasion, but you’re still capable of rallying a group when needed.

Personally, I think there is a small problem with WotC’s modifier system in 5E, not a huge problem but one all the same.
I get that they wanted to simplify things in 5E, so in general stats go up to 20 for players and monsters and for the most part, monster difficulty is added through the proficiency bonus and though in the end it means a monster will hit more, the visual of it is that a maxed out player can have the same strength as an Ogre (Large Giant, CR2, STR+4) but because it has a +6 to hit, it’ll hit more.
Rather than make the Ogre stronger, it is just better at hitting and that’s it?
Because the modifier already comes across as a sort of “How good you are at X”, and then a proficiency bonus on top.. I don’t know how I feel about the actual mechanisms at play, a modifier cannot actually be “strength” as a human, even at their pinnacle, shouldn’t be the same strength as some of these monsters (and I do realise, it is on me as I am interpreting the modifiers as a sort of proficiency), and granted it doesn’t take long for monsters to start getting above the 20/+5 stat limitation.
It just feels to me like in 5th Edition, WotC sought to simplify everything (and that’s fine, wonderful even, makes it easy for new players to get in to the hobby) and in doing so either made it too simple, or just made choices that don’t make a great deal of narrative sense, even if it makes mathematical sense.

Regardless of design choice, the fact remains that a -5 modifier doesn’t make you a bumbling incompetent buffoon, and to be honest the gap between a stat score of 0 and 1 feels at times larger than the gap between 1 and 10.
Even at -5 you can still be an effective party member, but at 0 you’re dead.

Admittedly, in gameplay experience the lowest I have ever gone in a stat has been -3 Intelligence, in a character called Whodob, his concept was primarily innocent and excitable and he would do anything with his best friend as long as it was phrased as a quest, but he was still capable of working out the conspiracy going on around him, he just wasn’t naturally gifted at it, and he would still have been capable if he’d have been -5
I may have played up the trope of his lack of intelligence, but that doesn’t mean he would have been useless.

Do not go being afraid of playing a character with a real weakness, even if that weakness takes you down to a negative 4 or 5 modifier, doing so allows someone else in your party to truly shine.
Do not think that a low score in any stat means you need to play it up as “Completely and utterly incapable”, you can be smart but absent minded, you can be interesting but not popular, you can be capable but unable to swing a giant fucking sword.
Do not worry, have fun.